As farmers in Kent during the 1970s and 1980s David and Eileen Shelton were looking at more cost-effective methods of draining their land. They devised a spinning disc trenching machine which they quickly realised had commercial possibilities. Shelton Trenching Systems was set up as a partnership with David and Eileen Shelton and sales of the machine started in 1981. In 1983 the machine was awarded a Royal Agricultural Society of England (RASE) Silver Medal for design, build and operating performance.

The machine was further adapted in 1983 and fitted with a soil clear up system that enabled the equipment to be used for the installation of sports turf drainage. Additional RASE Silver Medals for new equipment introduced to the market were awarded in 1999, 2004 and 2007.

In 1997 the company name was changed to Shelton Sportsturf Drainage Solutions to better reflect its business, and in 2007 it was made a limited liability partnership.

In May 2013 Mick Claxton and Richard Clark formed a management buyout to purchase the business. Mick and Richard had been with Shelton for 15 and 13 years respectively at the time. The business name changed to Shelton Sportsturf Drainage Ltd and all members of staff were retained.

Our offices and manufacturing are all based in rural Lincolnshire. 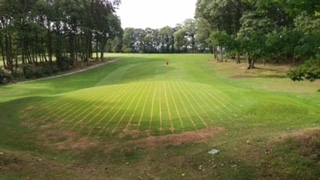